The prominent role of native Hawaiian women in governance and in family life was thwarted deliberately by the Calvinist missionaries and by the choice, made by Kamehamea’s wife, Kaahumanu and other rulers, to embrace the same Calvinist beliefs and cultural mentality contrary to the beliefs of common people. In The Rights of My People, author Neil Proto explores the intellectual, social and political Renaissance of native Hawaiian women; their challenge to the Calvinist mentality and their reemergence in governance and civic life. For King Kalakaua and, critically, Liliuokalani, the reemergence of women- as allies – was essential to their ability to regain native Hawaiian control of the nation. Liliuokalani’s most trusted advisers – in Hawaii and on the continental United States- during the two battles for sovereignty over annexation and the taking of the Crown lands were native Hawaiian women. Drawing, in part, on existing work and previously unexamined correspondence, Proto amplifies the evolving meaning of the Renaissance in Hawaii throughout the book, especially in his third chapter, Allies: Women and the Renaissance of the Ali’i.

Excerpts
“In 1893, when Joseph Nawahi of Hilo assumed the presidency of the Men’s Patriotic League and Emma Nawahi and Abigail Campbell assumed responsibility for the Women’s Patriotic League, Liliuokalani had witnessed and, with her brother, had helped foster another dramatic transformation in Hawaii: The redefinition of the ali’i and the reemergence of women in what she knew – when taking the long view – was an enduring struggle for Hawaii’s identity imbued deeply in the fate of the land.”

“Abigail Campbell’s and Emma Nawahi’s origins and experiences were different. Both women now would draw on their intuitive and learned skills in the context of a grave public matter: how to discern motives, recognize emerging political forces, report on events, and prognosticate the future in order to provide leadership and counsel to others.”

“In 1892, when native Hawaiian men – as “qualified voters” -submitted petitions to Liliuokalani in support of a change to the constitution, she also received petitions from women. They had “crossed out the references to qualified voters, substituting their own wording so that the petition read, in part, ‘we humbly, the people of your own Lahui [Nation] to whom the names below belong…are Hawaii’s own Native women.'”

“In the end, the imposition of the 1887 constitution and, in 1893, the coup d’état had little to do with Kalakaua’s or Liliuokalani’s lack of adherence to constitutional norms or to profligate spending. The imposition had to do with their skill at provoking, in a way that now seemed permanent, Hawaiian nationalism and an ability to govern politically. Their sin: Both monarchs challenged the seventeenth century New England model that Thurston, Dole, and Smith insisted upon.”

“The intellectual ferment and cultural tension occurring in Hawaii, soon to be recognized abroad in the singular form of the coup d’état, reflected strains of thought that would intersect and conflict with the no less contentious and divisive dialogue occurring in America. These included the debate over race, immigration, and the recognized failure of Reconstruction; the post-Civil War critique of civil and voting rights led by Cady Stanton, Susan B. Anthony, and Victoria Woodhull; the concern for post natal care, health, and social obligation at Hull House and the work of Jane Addams; and the harsh critique of capitalism and its influence on government voiced by William Jennings Bryan, Senator Richard Pettigrew of South Dakota, and the literary realists Frank Norris and Theodore Dreiser.” 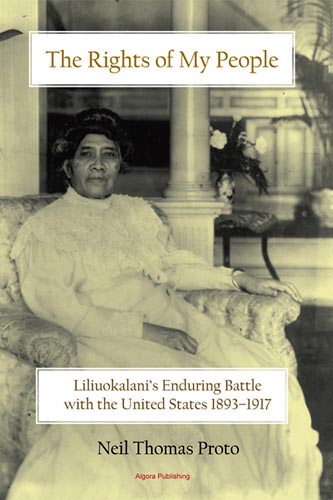